The 2017 Canada Lecture was held February 7th, at the University of Toronto's Hart House. For the past 17 years Nation has dedicated his professional and personal time to supporting young people in communities across Toronto. He has played many roles throughout his career that have led to social, cultural and spiritual impact. He is a respected partnership builder, community animator and developer, artist, musician, teacher, and social change agent.

After 8 years at Dixon Hall serving the Regent Park community, Nation has helped to lead the Youth Challenge Fund (YCF), a 46.6 million dollar investment in youth led/ youth driven initiatives across Toronto’s inner suburban communities. The work focused on the needs of the city’s most underserved youth and led to the investment of 111 initiatives across the inner suburbs, including 17 legacy initiatives.

As United Way’s Director of Youth Initiatives he oversees the implementation of United Way’s Youth Success Strategy, working with the provincial and municipal government, private sector partners and community agencies to tackle the employment challenges that over 80,000 youth face in the GTA.

Mary Gordon is the Founder, President and the inspiration behind Roots of Empathy and Seeds of Empathy. Mary Gordon is recognized internationally as an award-winning social entrepreneur, educator, author, child advocate and parenting expert who has created programs informed by the power of empathy. In 1996 she created the Roots of Empathy program in Ontario. Her not-for-profit organization offers programs in every province of Canada, New Zealand, the USA, the Republic of Ireland, Northern Ireland, England, Wales, Scotland, Germany and Switzerland. In 2005, Ms. Gordon created the Seeds of Empathy program for 3 to 5 year olds in child care. She is a Member of the Order of Canada, the Order of Newfoundland and Labrador, the recipient of the Queen’s Golden Jubilee and Diamond Jubilee Medals, and is Canada’s first Ashoka Fellow.

Marie Wilson served as one of three Commissioners of the Truth and Reconciliation Commission of Canada following decades of experience as an award-winning journalist, trainer, and senior executive manager, including many years as the Regional Director for the Canadian Broadcasting Corporation in the CBC North region responsible for three northern territories and northern Quebec. Fluently bilingual in French and English, she has been a university professor, a high school teacher in Africa, a senior executive manager in both federal and territorial Crown Corporations, and an independent consultant in journalism, program evaluation, and project management.

Dr. Wilson was appointed the 2016 Professor of Practice in Global Governance at the Institute for Study of International Development, McGill University, and a 2016-2017 Mentor for the Pierre Elliot Trudeau Foundation. In addition to awards for writing and journalism excellence, she is the recipient of a CBC North Award for Lifetime Achievement, Northerner of the Year, the Calgary Peace Prize, the Toronto Heart and Vision Award, and the Pepin Award for Access to Information. She has received Honorary Doctorates from St. Thomas University, the University of Manitoba and the Atlantic School of Theology, and has been awarded both the Order of the Northwest Territories and the Order of Canada. 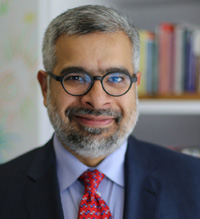 Nouman Ashraf is Assistant Professor, Teaching Stream within the Organizational Behavior and Human Resources Management area at the Rotman School of Management. He possesses a broad range of professional, academic and research interests, with a specialized focus on enabling innovative and inclusive practices within organization life. For the last decade and a half, he has held progressively senior roles at the University of Toronto. He is a recognized thought leader in governance, and has taught thousands of directors in the national Rotman program on Not for Profit Governance in partnership with the Institute for Corporate Directors since its inception in 2007.

An award winning faculty member, Nouman teaches Emancipatory Leadership within the Executive MBA as well as the OMNIUM Global Executive MBA Program, Leading Social Innovation within the 2 and 3 Year MBA programs, and Leading across Differences within the Rotman Commerce Program. He is the Academic Director of various custom leadership programs in partnership with Rotman Executive Program clients.